Fydrych takes a contemporary place in an old profession: changing the course of history with humour.

Andy Bichlbaum and Mike Bonanno, the Yes Men In the forward to "Lives of the Orange Men"

The Western World will find out much more about the situation in Poland from hearing that I was put to jail for giving tampons to a woman, than from reading the books and articles written by other people from the opposition.

Waldemar "Major" Fydrych in an interview by a foreign correspondent, 1988

Have I still been President of Poland, I would promote you to the rank of general. 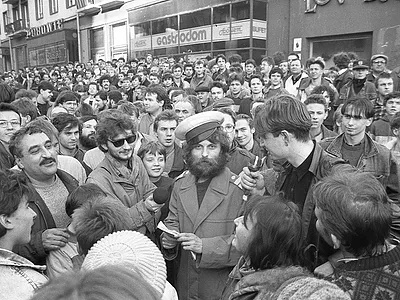 The Orange Alternative undermined the foundations of Communist ideology ‚Äì not by fighting against it, but by making fun of it. The young people who came to happenings probably hurt the regime more by mocking it than a whole decade of riots would have done. Major Fydrych and his legions of dwarves convinced them that things may have been bad ‚Äì but they weren‚Äôt serious.

Anne Applebaum, journalist of Washington Post, Pulitzer Prize winner in the foreward to "Lives of the Orange Men"