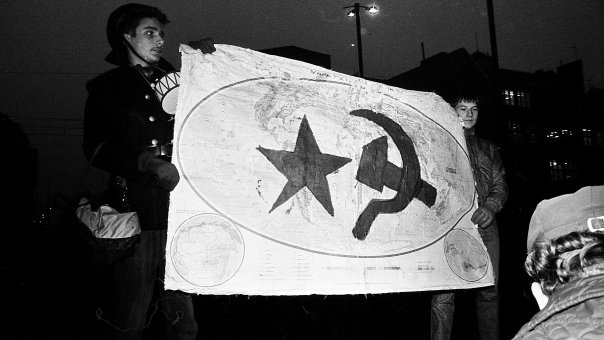 Red wings were flashing in the distance, and militiamen were carrying a banner they had taken from demonstrators, which read āRed Borscht.ā

The number of people arrested was growing. The command āArrest the reds! Arrest the reds!ā could be heard issuing from a Nysa. The militiamen were circulating in the crowd, observing what people were wearing. They were were alert, spotting the smallest element of red clothing. Close by, a lady in a red hat was being led away; further in the distance was another lady in red gloves and a fellow in a red scarf. Major and Comrade Jarek passed a group with red bowties and bows. They reached the clock.

āWas the mask of Lenin on the bow of the cruiser?ā asked Comrade Major.

Nearby on the street lay the October Revolutionās Eve star and the remains of the props from the red carol singers. Alongside them glittered the portraits of the icons of the revolution. A crowd was forming in the distance. A fresh militia unit headed in that direction.

A slogan was being shouted from a megaphone: āMilitiamen are requested to go into the underpass! Militia, please enter the underground!ā The crowd burst out laughing on hearing this.