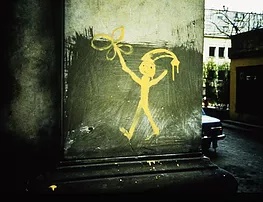 On their way home, Major unfolded the perspective of the new revolution before Dziewit.
‘We’ll paint dwarfs on those patches. There are thousands or tens of thousands of paint patches in Wrocław,and probably a million in the entire country. If a million dwarfs get painted on a million patches, people will find strength and the government will fall.’
‘That’s... incredible,’ said Dziewit, reeling.
‘Later,’ said Major, ‘armies of dwarfs will appear on the streets. There’ll be the dwarfs and the militia. The general will surrender. If not to the cardinal, then he’ll come out with a white flag and surrender to the dwarfs.’
Dziewit stood stunned by this sensational news.
‘Isn’t it wonderful; dwarfs everywhere?’

from Waldemar "Major" Fydrych’s book Lives of the Orange Men