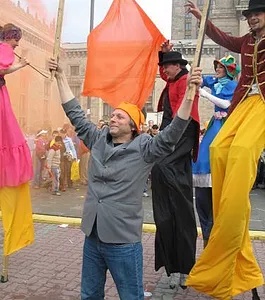 Waldemar "Major" Fydrych was born on April 8th 1953 in ToruÅ  as Zodiacal Aries. He is a graduate of History and Art History from the University of Wroclaw in Poland. In 2012 he received PhD degree from the Academy of Fine Arts in Warsaw.

He began artistic opposition activities as a student in 1970s. Following the creation of Solidarity in GdaÅ sk in August 1980, two months later in Wroclaw he launched with his friends the New Culture Movement. It was at that time that he wrote the "Manifesto of Socialist Surrealism" in which he argued that the socialist government was so inherently surrealistic that it could be seen as a form of art and that even a single militiaman standing in a street was a work of art.

During the Martial Law period of 1981 - 1982, Poles became familiar with Major Fydrychās work through his stylistic dwarf graffiti painted on spots covering anti-regime slogans written by other oppositionists on city walls. Altogether over thousand of such images were painted in the largest Polish cities by Major Fydrych helped by a small group of friends.

Fydrych is credited with saying that it was hard to take the police seriously when being asked if they had been in an illegal meeting of dwarves, and this was part of the Orange Alternativeās power; people began to fear the militia less.

In spite of appearing to be just whimsical fun, the āhappeningsā of the Orange Alternative actually empowered the people of Poland against the violently repressive tactics of the militia. In this way, the Orange Alternative became one of the most important precursors of the "carnival revolution tactics" often used in the present-day social and political contexts.

For his work he was honoured with numerous awards: in 1988 he received the Solidarity Award of Puls Publications from London and the Polkul Award from the Australian Polish community. Waldemar "Major" Fydrych has so far been the first and only recipient of the "Ash and Diamond Award" established in 1988 by the Polish Oscar winning director, Andrzej Wajda.

The regimeās Ministry of Interior Affairs had also "awarded" him with its close attention. In March 1988, while distributing in the street womenās hygienic napkins (an item greatly missing in those days), he was arrested and sentenced by the Court to three months of prison, from which he was released earlier following public uproar.

Today he lives in Warsaw, Poland with his two dogs, Fajtusia and Fionka, and his girlfriend, Agnieszka. He still paints his dwarves, but luckily for the Polish state, he manages to stay out of prison...